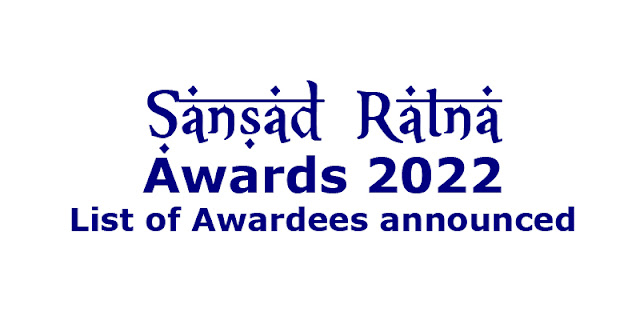 The Sansad Ratna Awardees for 2022 Announced

11 MPs, Four Parliamentary Committees and Two Veterans to be  Honoured

According to K. Srinivasan, Founder Chairman of Prime Point Foundation and Sansad Ratna Awards Committee the nominations  have been made based on the cumulative  performance of the members from the beginning of 17th Lok Sabha till the end of Winter Session 2021.   He said the nomination  was based on the data provided by PRS India.

Dr.  Amar Patnaik (BJD, Odisha) and  Dr.  Fauzia Tahseen Ahmed Khan (NCP, Maharashtra have been nominated for their performance in Rajya Sabha in 2021 under ‘Sitting Members’ category’.  Shri K K Ragesh (CPIM, Kerala) is nominated  for the Award under the ‘Retired Members in 2021’ category for his outstanding performance during his full term in Rajya Sabha.

From this year, Prime Point Foundation and PreSense will be introducing a new category to honour the veteran leaders for their contribution to Indian politics and people of India. The Jury Committee has nominated Dr HV Hande (Age 94 – Senior BJP leader, Tamil Nadu) and Dr  M.  Veerappa Moily (Age 82 – Senior Congress leader, Karnataka) for this award.

Sansad Ratna Award was instituted on the suggestion of Dr APJ Abdul Kalam to honour the top performing Parliamentarians.  The first award function was held in 2010 at Chennai and Dr Abdul Kalam himself launched the initiative.  Till now, 75 top performing Parliamentarians have been honoured.  12thEdition of Award function will be held on Saturday, 26th March 2022 at Delhi.