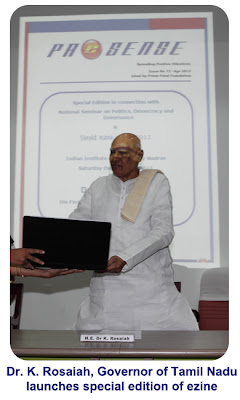 This special edition this unique 73rd edition (April 2013) of your ezine PreSense was released by Dr K. Rosaiah, His Excellency The Governor of Tamil Nadu during the Sansad Ratna Award function on 20th April 2013.  With the launch of your ezine PreSense  by the Governor of Tamil Nadu, this ezine enters a new era of credibility adding more responsibility to our team, to continue to  provide highest quality contents in future.

On this happy occassion, editorial team thanks all the readers for the sustained support and feedback.
After the launch of this special edition by the Governor, we  added the photos and the proceedings of the Sansad Ratna Award function.  Since the General Elections will be held in few months, this ezine will be useful for all the citizens to understand our constitutional democracy, which we may have to be proud of.
This edition broadly contains the following:
1.  Dr Abdul Kalam’s exclusive message to our Sansad Ratna Award function;
2.  Overview of Indian Parliament;
3.  Interesting facts about Parliament chambers;
4.  Sittings held by Indian Parliament from 1952 to April 2013;
5.  Business done by Lok Sabha during sittings;
6.  Humour in Lok Sabha;
7.  Performance of 15th Lok Sabha – Bills passed – disruption details;
8.  Top performing MPs of 15th Lok Sabha;
9.  A brief report on Sansad Ratna 2013 Award function;
Since this is a special edition released by the Governor, we have focussed exclusively on Indian Parliament.   We will follow our usual format from the next edition onwards.
This ezine may be downloaded from the following link. (700 k in pdf)
http://www.prpoint.com/ezine/presense0413.pdf