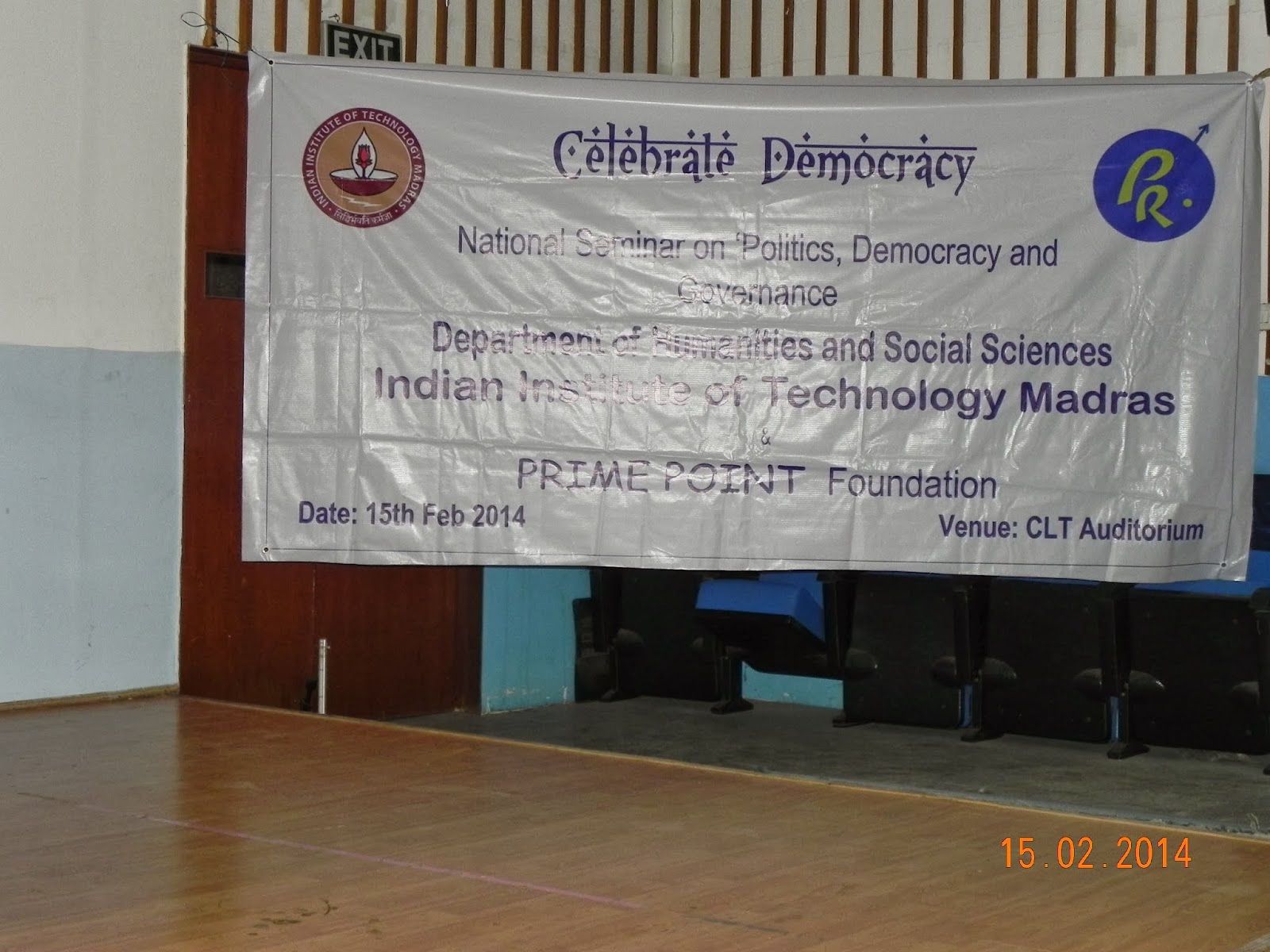 A National Seminar on ‘Politics, democracy and governance’ was held at IIT Madras on 15th Feb 2014 organised jointly by Prime Point Foundation and IIT Madras. This seminar was divided into three sessions.
Session I – Presentation by Mr Arvind Sivaramakrishnan, Senior Deputy Editor, The Hindu on ‘ Electoral systems and the composition of elected Assemblies in various democracies’.  He explained how the vote share gained and the seats gained do not match with each other.  He also compared the electoral systems in other countries.
His presentation may be downloaded from this link.
Session II – Panel discussion on ‘Media and Politics’.  Mr Ramalingam (Dinamalar), Mr R Bhagwan Singh (Deccan Chronicle), Mr Pandey (Thanthi TV), Mr Badri Seshadri (Internet media expert) and Ms Josephine (Social worker) were the panelists.  Bhanu Gomes anchored the panel discussions.
Burning issues like market driven media,  paid news, sensationalising  news and many issues were debated. The panelists also explained the economics of publishing a newspaper.  When a newspaper costs Rs.12/-, it is being sold at Rs.3/-.  The balance of Rs.9/- had to be met out of advertisements.  Hence, they are required to be more market oriented.
Session III – Panel discussion on ‘Mandate 2014’.  Mr H Raja (BJP), Mr T K Rangarajan MP (CPIM) , Mr Gobanna (Congress), Mr Thol Thirumavalavan MP (VCK), Mr David (AAP) and Mr Maalan (Senior Journalist) were the panelists.  Ms Bhanu Gomes anchored this panel discussion.
During this discussion, all the representatives of the political parties shared their policies and the agenda that may be placed before the voters during this General Elections 2014.  Though the panelists belonged to different ideologies generating heat during debate, they presented their views with high level dignity and courtesy to each other.
After the panel discussions, Divya one of the beneficiaries of the Education loan scheme of Canara Bank was honoured for her getting University Rank, braving all challenges.  Mr T K Rangarajan MP, Mr P Subbramanian (DGM, Canara Bank) and Mr Arumugam (AGM, Canara Bank) presented the memento to her.