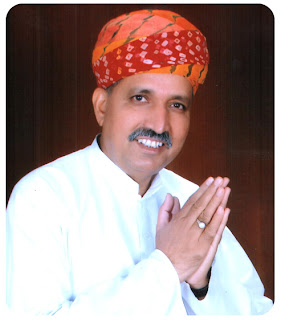 Arjun Ram Meghwal, Member of Parliament from Bikanir (Rajasthan) is one of the top performing MPs of the current 15th Lok Sabha.  Mr Arjun Ram Meghwal, a Rajasthan cadre IAS turned politician, hails from a poor family.  With his hard work and passion to serve the society, he became one of the law makers of the country.

No 1 for debates among all MPs
Till the end of the 12th Session of the 15th Lok Sabha, he has participated in 345 debates, introduced 20 private members’ bills and raised 543 questions.  He has participated in 99% of the sittings.  He ranks No 1 among the entire Lok Sabha Members for participation in debates.
Generally, many of the members are seen in the Central Hall of the Parliament when the Parliament business is conducted in the House.  He is one of the few MPs, who always sits inside the Lok Sabha and listens to the other members from different parties and different regions.
Preparation for debates and questions
When asked how he does the homework for all his Parliamentary speeches, he politely says that he would spend time in the Parliament Library, attend the briefing sessions of PRS India, read a lot of books and newspapers to get himself equipped with various facts.
He is also keeping a ‘Resource Panel’ consisting of doctors, lawyers, engineers, social workers and bankers to support him on the various debates he may participate in and to raise questions on.  “This method helps me to speak logically and to the point in the House”, says Mr Arjun Ram proudly to PreSense.
His concerns
He also expresses his concern over the disruption of Question Hour.  Though the rule book permits the suspension of Question Hour to discuss any nationally important issues like gang-rape, he feels it should not be a routine one.
“Bikanir is a tourist centre.  It is yet to be connected with other cities by air.  In 2013, I want to connect Bikanir with other cities by air.  This is my dream project for 2013.”  Arjun Ram Meghwal says with beaming confidence.
PreSense congratulates him for his passion in his Parliamentary duties.  Please listen to his exclusive interview in the link http://youtu.be/CaLwHK6Ipk8